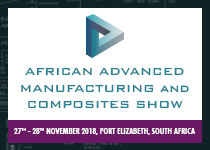 Nelson Mandela Bay has been confirmed as the host city of the second African Advanced Manufacturing and Composites Show.

The Show, according to organisers, represents the largest gathering of Fourth Industrial Revolution roleplayers in Southern Africa.

It injected cash flows of R42,8m into the city’s business community in its inaugural edition, with Nelson Mandela Bay retaining host status for the second edition on November 27 and 28 this year at the iconic Nelson Mandela Bay Stadium.

The Show is hosted under the auspices of the DTI-supported, national Composites Cluster, in collaboration with government industry and academia.

Composites Cluster MD, Andy Radford said the participation of over 3000 influential roleplayers positioned the inaugural Show as “Africa’s premier Initiative in the field  supporting  the triple helix model of innovation which involves interaction between academia, industry and governments, to foster economic and social development.”

Radford said plans announced by the AIDC EC to establish a globally inter-connected Smart Industrial Academy in the province, “attached to the prowess of global 4IR companies like Jendamark” positioned the Eastern Cape as a suitable host for the 2019 edition.

Formerly an industrialist at the CSIR, Radford is the visionary behind the Show, which he says is “an essential stepping stone to uniting the country’s stakeholders around a common vision and growing trade.”

“The Advanced Manufacturing sector is highly fragmented in South Africa.  Many associations and industry bodies promote advanced manufacturing but generally there is a lack of integration and awareness of even our own capabilities, which are substantial,” Radford said.

“Over 100 exhibitors showcasing three-dimensional printing, lasers, automation, virtual and augmented reality, artificial intelligence,  drones and materials of the future are exciting tools to encourage a new generation of engineers and scientists but we need to expose them and industry to these technologies and there is no time to waste, ” Radford said.

Radford said the Show had secured support from organisations across the globe and  would be accessible to trade visitors and learners.